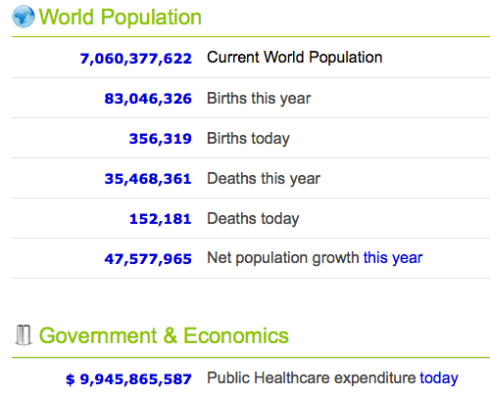 In a matter of 5 minutes, the number increased by about 700 to 7,060,378,325.  It’s a mesmerizing clock to watch, life and death ticking away.  (The page also includes other fascinating and curious statistics, such as Cigarettes Smoked and Tweets sent. Check it out.)

In the summer of 2005, I visited Boston to pursue a romantic interest.  We spent a week going on city dates, the best of which was at the Museum of Science, at the top of the Charles River.  Sure, it’s kind of nerdy.  Sure, it’s full of kids, but I guarantee that once you reach the piano key stairwell, you will gleefully jump a tune à la Tom Hanks in FAO Schwartz back in the 80’s.

A month or so later, I began classes for Modern Drama, a course in Dramatic Literature that covered such greats as A Raisin in the Sun and The Goat, or Who is Sylvia?  It was one of the most effective courses of my academic career.  Our professor, Ms. Eve Muson, was a real hard-ass who demanded only pertinent, effective commentary and discussion in her class.  We had heard rumors from upperclassmen.

“Do not waste her time.”

You can never really prepare for your first meeting with another person.  You won’t know what the deal is until someone opens their mouth and reacts.

It was the first day of class.  We were listening to the opening lecture, discussing the concept of “Modern Drama” within the lineage of theatre literature.  At some point I made a correlation between the World Population Meter in the Museum of Science and some gripping, essential tenet of drama.  Or perhaps she had just mentioned birth and death.  I raised my hand to comment, the first person in the entire class.

The following dialogue is approximated:

“It’s like in the Museum of Science.  The World Population counter is constantly changing because of the number of births and deaths each day.”

“And what does that have to do with what I just said?”

“Please, everyone, don’t make any irrelevant comments.  We don’t have time.”
In response, the whole room of 50+ college sophomores recoiled and shifted in their seats.  It was true!  Verbal missteps and weak thesis statements were not allowed in this classroom, and I had been the guinea pig.
It was truly a fantastic moment, teaching me the importance of constructive commentary in discourse.  In the moment it was a very pertinent association, and I think of it each time I hear the growing tally of people on Earth.

Sometimes we can forget the humanity behind statistics.  It just takes a birth, death, or catastrophic oil spill for us to come back to reality.

This post is dedicated to the newest addition to the Doyle family, my nephew Flynn, who I am proud to say is the cute-as-a-button addition to the birth tally for August 12th, 2012. As I write this (roughly 24 hrs after 1st draft) the current World Population is: 7,060,583,390.