Late last night, at the end of a good bottle of red wine, I found myself wandering YouTube, and landed on a couple of clips from Sister Act.  For some reason this is one of the movies I rented over and over as a child, reliving the irreverent hijinks of Whoopi Goldberg as a Reno singer come undercover nun.  Stupid, hilarious, and some great music.  We all have an inner gospel singer waiting to sing.

Jump to halfway across the world, in southern Niger, West Africa.  It’s 2007.  It’s our “Spring Break,” about halfway through my 4 months living abroad in Niamey.  This trip consists of going to Burkina Faso, staying a week with Peace Corps volunteers, and north up to Agadez, the ancient trading city.  We are in the city of Konni, where there is a Peace Corps training center, and we are about to prepare to stay with Volunteers the rest of the week in the bush.  The camp is well-guarded, has a nice kitchen, and includes a large video library in the media room.  We were going to watch a movie as a group, and it was decided by my roommate Habuwai that we would watch Sister Act II.  It was great, we were singing and laughing along.  (I always marvel at the younger Lauryn Hill.  She has a real voice that haunts the bones and strums the heartstrings.)  The choice wasn’t to everyone’s taste, but what are you gonna do?  It wasn’t so much the point.

What’s always curious about traveling in a foreign country is how ridiculously starved for American culture you become.  Foodstuffs like Mac&Cheese, Jello-O, and anything from Trader Joe’s was a serious personal commodity, eliciting the comforts of home.  Another very popular thing was having friends & family send copies of such intellectually stimulating publications as US Weekly and People Magazine.  Normally I don’t really care about the banalities of celebrity culture, but we read the articles out loud and passed it around like it was porn.  That was also the year Daniel Radcliffe got buff and bore himself in Equus.  We were screaming and giggling at how much Harry Potter had grown up.

Anyways we were all wrong.  Ron turned out to be the hotter, better actor. 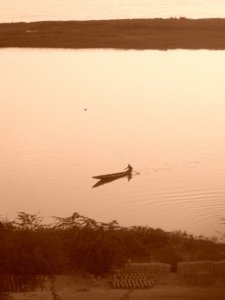 Wanna see what I’m talking about?  Check out some of my photos from Niger here.