Santa Claus is coming to town. Christmas lights, too, although in mostly pale blue. There is a considerable lack of tacky, blow-up, light-up anthropomorphic ornaments because they’re aren’t many front lawns in Greater London.  Shopping on Christmas Eve is perhaps even more anxiety-inducing: the shops and markets close by 4PM.

For produce my parents and I went to Borough Market in Southwark, near London Bridge, where traders and vendors have been hopping their goods since the 11th century.  We grabbed rocket and fresh veg for my Christmas Dinner charge: the salad. After a walk-through and feast for the eyes, we grabbed gourmet kebab sandwiches from a trio of friendly British men cooking in front of their restaurant, drinking mulled wine.  Pork, chestnuts, apricots and pickled cabbage are an excellent combination with homemade mustard and harissa.  Dad wore his red Sriracha t-shirt, so we had the pleasure of introducing them to the hot sauce that is only just now making its way into the UK.  And to think of how worried we all were when the Sriracha factory in Irwindale almost closed this past spring.  As if.

As it happened, at the edge of the market is Southwark Cathedral, a structure that has been operating as a church in shape or form for 1400 years.  It is a marvel of Gothic Architecture, with stunning, dramatic carved ceilings, religious reliefs and statues. There is a persistent spiritual and historical energy to the space.  I pause and romanticize over the millions of feet that have passed over the stones, including those of William Shakespeare.  The notion of standing in a place where a godfather of English Drama & Literature stood sends me into romantic and existential whims at the same time.  So I take some pictures.

After a cold walk along the Thames, I go with Mom to the grocery store a block away from her apartment.  The English don’t like to walk in straight lines.  It is completely unlike navigating NYC, in which everyone files into lines on the sidewalk like a two-lane highway.  Nope, it’s every man, woman, or child for themselves.  If I had any path to make, I would wobble too.  It was absolutely infuriating because I couldn’t relax into the amoebic movements, as well as the fact that no one was communicating verbally, a part from saying ‘sorry’ when bumping into each other.  The word ‘sorry’ is a funny adjustment, too, because it’s not so much an apology as it is ‘excuse me.’  It’s a gateway word into the culture and attitudes of British propriety, and I do find it strange.  This is my first time in another English-speaking country, and while the language is familiar and comprehensible, there proves to be as much variation in behavior as in dialects.  It’s like Lewis Carroll swirled it all around, and America is somehow standing on its head.

My family is medium-sized, so Christmases are still an elaborate affair of coordination.  But instead of 10 people at a table this year, we were three.  So, with that, some of the Christmas Eve and Christmas Day traditions could be shed.  There was no ritual viewing of Star Wars or The Christmas Carol while baking bread, or a hike to a nearby waterfall in the Foothills of Altadena.  We didn’t even do presents until right before dinner.  But dash it all!  Christmas Road Trip.  We were driving to see the White Cliffs of Dover, and then to the site of the Battle of Hastings-which happened in 1066, just in case you didn’t get that question right in high school.

Our Zipcar rental was a sight to behold–a bright green working van covered with bird shit.  The side door opening to a storage-only trunk, so the three of us squeezed into a front seat.  It was much like driving a UHAUL, with only side view mirrors at your disposal.  I took the bitch seat for the trip down while Mom drove and Dad navigated.  “It’s a good thing we like each other,” said my Mom.  “Yes. It’s a good thing we can handle looking like clowns in a big green van,” I thought.  It instantly obliterated my tourist shame.  Carpe diem, YOLO, those kinds of things.

Dover is on the Southeast Coast of England, looking out onto the English Channel.  It is a port town that played a vital role in WWI and WWII, with various trenches still preserved, and prior to air travel, passage from the Cliffs was the primary route to the rest of the European Continent. Our gift from Santa this year was a sunny, clear day of vacation. Merci!  From the top of the cliffs you could see the French coastline a mere 21 miles away.  It’s like standing on the beach in Southern California with Catalina Island in view, when you’re lucky enough for the smog to clear.  “Bonjour, France!” I said several times.  All you have to do is take a car ferry over to Calais.  Paris for the weekend was very tempting, though none of us had our passports.  The earth beneath the Cliffs was soft, springy, and quite muddy from a recent rain.  The cliffs are chalky and white because of the deposits of single-celled algae from the Cretaceous period. I had a spurt of energy, and went ahead through the muddy switchbacks to reach the next cliff peak, some bramble cutting my tights in the process. The cliff edges have no rails, so there was cause for caution, and it is difficult to tell when you’re on the peak.  But a precipice is always inspirational because it is so dangerous!  The grass blends from beneath your feet to the background as the ocean swells and the wind blows.  These are the moments when I travel where I feel like shouting a slew of words that don’t actually form a sentence but summarize my feelings. “HISTORY! ENGLAND! MANKIND! WORLD!”, followed by lots of jumping and shouting.  Imagining it vividly is a good substitute, too.

Then we took a drive through the English countryside to Battle, about 6 miles inland from Hastings.  We raced the blinding, setting sun to catch our glimpse.  Back in 1066, it was a decisive win for William the Conqueror, and a subsequent blending of Anglo-Saxon and Norman (French) cultures. That following Christmas he was crowned first Norman King, and the Anglo-Saxon reign of England came to an end. French became the language of the king’s court, and from there mixed and mingled to give birth to modern English.

There it was!  There was my distant, distant connection.  The day before, while walking around, I’d thought that there were great similarities between London and Paris, in both look and feel.  It’s in the age of the cobblestone, the vibe, and a spirit of its inhabitants.  Here was one physical reason. 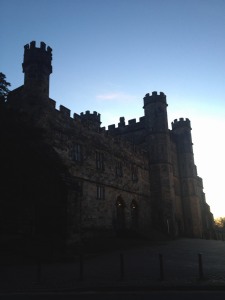 My parents have long been making treks to places of military conquest. They have always shared interests in Ancient and Medieval History, and I’m lucky enough to benefit.  The Abbey was closed, and the town was quiet for Christmas dinner, but the journey was more momentous than the normal tourist checklist.  We didn’t require the medieval reenactment to glean any more significance.   As it turns out, thanks to the information divulged by our resident history lecturer MY DAD, a Doyle ancestor fought for the Norman side.  So the impromptu Christmas Day road trip turned into a quiet, little brush with our family history.

After finishing the comedy of the commute back to London, we sat down to dinner at 10PM, just after presents.  One Christmas tradition that is non-negotiable is roast beef.  Albeit without horseradish, we drank good wine, ate gingerbread with poached pears, and watched a VHS-quality download of The Santa Clause.

4 thoughts on “Across the Pond: Christmas in London”