Please to read. Many more shows Makbet in container in Bushwick. Please to bring friends.

Makbet, playing from October 1st to 18th at Sure We Can, Bushwick, is five actors in search of “the Scottish play:” we’ll let Mari S. Gold tell you all about!

When Will We Three Meet Again?

In thunder, lightning or at a recycling center in Bushwick, Brooklyn? If you picked the latter, you were along for the ride as Theater Group Dzeici presented Makbet, a “gypsy ritual Macbeth.” 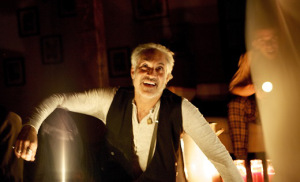 According to the group’s Rules of Engagement, “three actors will play all the roles except on Sundays.” Since I attended on a Sunday, five actors took part while others sat among the audience, speaking on occasion. Viewers were outdoors perched on black plastic boxes. Apparently on other days, presentations take place inside a shipping container. The rest of the rules:
“1.Actors must know the entire text;
2.Actors may not play…